Legend of the Lost Pitchpipe 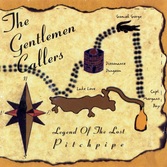 Released: 1995
Recorded by: 1994-1995 Gentlemen Callers
Recorded & Engineered at: Forward Productions Studios by Sasha Leland
Mixing (which took forever) by: Sasha, Will and Ward

Legend of the Lost Pitchpipe was first released as a casette tape, then a CD.  Track #3, "Angel," was selected to the Varsity Vocals Best of College A Cappella (BOCA) compilation album in 1995.  The inside jacket reads " "GENTLEMEN" We carry on what you have created"
1. The G.C's
arr. Will Galvin
Duet: Will & Jeff G.
Artist: Howard Ashman & Alan Menken

4.  My Lord What A Mornin'
Written & Arranged by: R. Lee Gilliam

6. Only You
arr. Will Galvin
Solo: Will
Refrain Duet: Andy
Artist: Yaz