History of the Gentlemen Callers 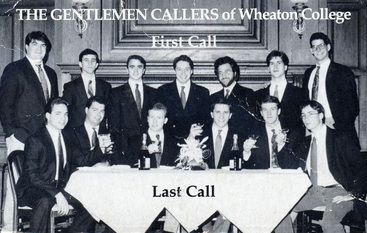 Original Gentlemen Callers
The Gentlemen Callers arrived in Norton in the fall of 1988. Their arrival coincided with, lent voice to, and put a face on the newly-coeducational Wheaton College. From 1834 to that fall in 1988, Wheaton had only known female students. But that was changing, and the GCs were at the forefront of that change.

The young men entering Wheaton's first co-ed class were brave enough to lead change and smart enough to count the male-to-female ratio. But they were also talented enough to found the College's first and only all-male a capella group. They did this with the encouragement of Dean Sue and Dean Jack, and with the help of the Whims and the Wheatones. The leaders of these all-female a cappella groups shared their passion and expertise with the incipient GCs, auditioning those men who stepped forward.

Once formed, the GCs launched forward. They created enduring traditions: performances at Slype, the iconic Men of Wheaton song, and Captain Morgan toasts. But they also changed with and adapted to the times. Over nearly 30 years, music styles have evolved - and so, too have the GC song choices. The group has sung everything from Disney's Aladdin, to The Who, to Katy Perry, and back to Frank Sinatra. This panoply of musical diversity is showcased in the group's seven CDs.

In 2017, the Union raised an endowment to provide ongoing resources to the students and alumni.  During the GCs' 30-year history, the group paused to honor and celebrate the 10th, 15th, 20th, and 25th anniversaries of its founding. At these reunions, old friends reconnected and new friendships were forged.  Beyond the wonderful camaraderie and music, these celebrations confirmed that the spirit, traditions, and values of the GCs endures.

Almost 100 young men have called themselves GCs. And more are added to the brotherhood each fall and late winter under the watchful gaze of Slype. It is for these men and those to come that the Union has been formed. If history is truly prologue, the GCs have exciting, bright, and fun days ahead.