Against the Tide (EP) 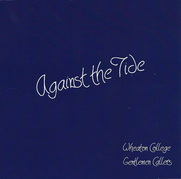 Released: Fall 2012
Recorded: Spring 2009
Tracked by: Liquid 5th Productions
Mixed by: The Vocal Company
"Against the Tide" is an EP recorded by the 2008-2009 GCs.  The tracking was done at Wheaton College in the academic rooms of Meenely during senior week in May of 2009.  It includes the five senior songs of that year.  "Against the Tide" marked the first time the GCs recorded with a professional a cappella company and went for the popular "produced" a cappella sound.  The title of the album comes from the lyrics of the original song on the album by Toby Rowe '09.
1. In Love With A Girl
Gavin DeGraw
arr. Alex Grover
Soloist: Alex Grover

5. I'd Do Anything For Love
Meatloaf
arr. Alex Grover
Soloist: Will Levenson featuring Sara Mielbye