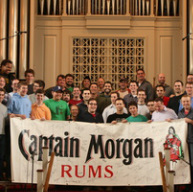 
The 20th Anniversary Reunion Concert was a great moment in GC History.  Over 70% of GC Alumni were in attendance for the weekend and concert.  New and old friends were united, President Crutcher, Dean Sue, and Dean Jack performed "Men" at the concert with the GCs, and Andy Tejada was back to sing the GCs most acclaimed song "Angel."
All GC Alumni
1. The GCs
2. Men of '92
3. Lonely At The Top
4. Walk On The Ocean
5. Angel